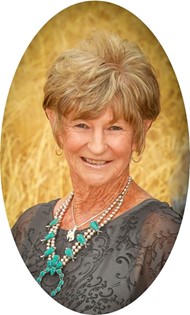 Kathy Anderson, 66, passed away at her home on Thursday, November 3, 2022. Kathy Lee Webb was born on December 11, 1955, in Heber City, Utah to Blaine and Juanita (Muir) Webb. Kathy was baptized into The Church of Jesus Christ of Latter-day Saints. She grew up in Heber City, Utah and graduated in 1974 from Wasatch High School.

On September 19, 1975 she married the love of her life, Clair Anderson in Daniels, Utah. In 1976, they moved to Riverton and made it their forever home, where they raised two sons. They celebrated their 47th wedding anniversary this September. Kathy and Clair were inseparable, they did everything together and were seldom seen apart.

Kathy had a heart of gold, was high energy and always busy, she worked at the Riverton VFW, Corral West, and helped in the kitchen at the Lincoln School. Her wit was razor sharp and she was always known to say something to make her whole family laugh.

In 1973, Kathy was crowned the Rodeo Queen in Wasatch County and always enjoyed and loved her horses. She had a true love for being outdoors, fishing, hunting, working in her yard and beautifying her large array of flower beds. Kathy was a proud and a well-respected homemaker, amazing cook and was keen on canning all of the rewards of her well producing garden. She was a member of the Riverton Country Club Ladies Golf Association. Kathy found humor in an occasional game of golf and treasured her friendships, including the deep love for her dog and cat.

A funeral service will be held 10:00am on Tuesday, November 8, 2022 at The Church of Jesus Christ of Latter-day Saints, 3100 West Main Street,  with burial to follow at Mountain View Cemetery in Riverton, Wyoming.  A viewing will be held from 6:00 pm to 8:00 pm on Monday, November 7, 2022 at the Davis Funeral Home in Riverton.

In lieu of flowers, donations can be made to the Riverton Animal Adoption Center/PAWS shelter in honor of Kathy and her love for her furry family members.