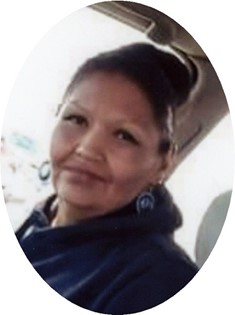 Agnes “Aggie” Bell-Addison, 44, of Riverton passed away in Riverton on Saturday, December 31, 2022.  A rosary and wake will be held on Sunday, January 8, 2023, at the Heritage Center, Riverton Fair Grounds, starting at 6:30 p.m.  The funeral service will be held at 2:00 p.m. on Monday, January 9, 2023, at St. Stephen’s Catholic Church with burial to follow at the Arapaho Catholic Cemetery.

Agnes Marie Bell was born on February 12, 1978 in Riverton, WY to Annarita Bell and Jimmy Blackburn.  She grew up on the Wind River Reservation and attended Arapaho and St Stephen’s schools.

Aggie was baptized into the Catholic Church and also practiced the Native American Beliefs. She attended Sun Dance and loved going to sweats.

She worked for Pertech Industries and Cowboy Catering Company. While working for Cowboy Catering, she traveled all of the states. She lived in Truth of Consequences, New Mexico for 2 ½ years before returning to Wyoming where she remained.

While in Truth of Consequences, New Mexico she married Allen J. Addison on May 10, 2010. He preceded her in death.

Aggie played volleyball, basketball, ran cross country, and played softball.  When she was in school she enjoyed math and social studies.  She enjoyed music of all types, Country, R&B, HipHop, Rap and Rock. Her favorite artist was Mattalica, Guns 7 Roses, Ashanti, Bone Thug, 2Pac, Too Short, Juvnile, Fleetwood Mac, AC/DC and many more.  She enjoyed being on social media and carried the name, “Kills Alone”. She loved the colors burgundy, black, blue, and silver. She loved beading, cooking, terrorizing, joking, going to the casino, and above all spending time with her grandbabies.

Please forgive us if we left any one out.