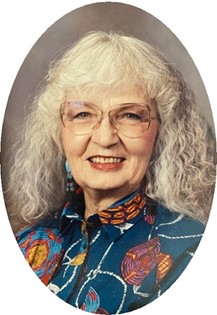 Private services will be held at a later date for Phyllis Evelyn Gies, 99, who passed away on Sunday, January 1, 2023 at Wind River Rehab and Wellness in Riverton, Wyoming.

Phyllis was born on April 1, 1923, daughter of Fredrick J. and Ercell B. (Thoman) in Kimball, Nebraska.  She graduated from Central High School in Washington, D.C. in 1941.

She and Theodore homesteaded north of Pavillion in 1949-1950 before moving to the Missouri Valley area, North of Riverton in 1964.  Phyllis lived in Wyoming for 73 years.  Mrs. Gies was a loving mother and wife who worked alongside her husband on the farm and was a “Vet Tech” for Dairy Farm.  For 30+ years, Phyllis worked for Fremont County Elections each year as well as Fremont County Fair for over 20 years as a Division Supervisor.

Gardening and taking care of her yard and flowers were a pleasure for Phyllis into her 90’s. She also enjoyed cooking large meals, which also included baking breads, pies and other delicious goodies for her family and friends.  She loved partaking in gatherings and visiting with her relatives and friends.

Mrs. Gies served as a Church Elder and Board Member for her Baptist church, was a past 4-H Leader and was active in the Missouri Valley Women’s Club.