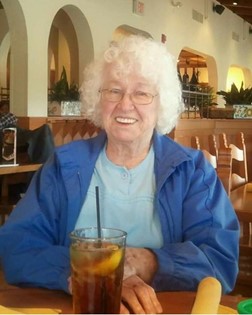 Ethel was born in Bridgeport, Nebraska, to Percy Tyrell and Susan Eunice (Gott) Wilson on May 28th, 1928.  She grew up in Nebraska with her siblings, Bill, Violet, Lavergne Dorothy, and her twin Bethel.

In February 1946, she married Herbert E Curby, and from this union three children were born; Della Sue, Percy “Bud”, and Charles “Chuck”.

On June 9, 1959, in Laramie, WY she was married by the Justice of Peace to Curtis Edwin Godfrey, together they had three daughters, Corette, Cheri, and Carol. They celebrated their 62nd wedding anniversary June 2021, before Curtis passed in November 2021.

Ethel considered her family her biggest blessing and loved every opportunity to be with them.  She enjoyed many other hobbies such as fishing, hunting, Wyoming Cowboys basketball and football, and watching all sports.  Ethel was very creative and crafty; she crocheted, knitted, cross-stitched, and made stuffed animals; she passed these skills on to her children and grandchildren.

One of her greatest joys was her grandchildren. She especially loved reading "The Night Before Christmas " to them.

Ethel’s love of nurturing and caring for children carried over to her "raising" a significant number of children in the Riverton community over the decades.

She was an active member of the Christian Church for at least 30 years.

She was preceded in death by her parents, her husband, Curtis Godfrey; twin brother, Bethel Wilson; her son, Percy “Bud” Curby; and, sisters, Lavergne Patton and Dorothy Rupe.

Memorial donations may be made to Help for Health Hospice in care of Davis Funeral Home, 2203 West Main Street, Riverton, WY 82501.