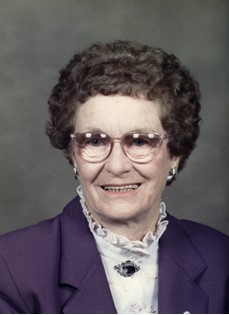 A resident of Fremont County for over 60 years, Mrs. Shippen had lived on the family's Riverview Road farm since 1994 before moving to Wind River Healthcare approximately two years ago due to health problems. Prior to "moving to the farm," Mrs. Shippen lived in Lander for 14 years where she worked as a Foster Grandparent at the Wyoming State Training School, Child Development Center, and Head Start.

Her family said Mrs. Shippen loved her job as a Foster Grandparent, often knitting sweaters for the children with whom she worked and making many close friends among the teachers and other "grandmas."

A funeral mass will be at 10 a.m. Monday, July 9, at St. Margaret's Catholic Church in Riverton. Following interment at Mountain View Cemetery, a reception will be held in the St. Margaret's School gymnasium.

There will be a rosary at 7 p.m. Sunday, July 8, at the Davis Funeral Home of Riverton.

A native of New Zealand, Mary Catherine Sinden was born on Aug. 9, 1918, in the North Island city of Napier to Joseph and Dorothy (Evans) Sinden. The fifth child in a family of six children, her family said she was very fond of her sister and four brothers and their families, and proud of her native country.

During World War II, she met Gordon Shippen of Dubois, a Marine who was on leave in New Zealand. They were married in June of 1943. In February of 1945, Mrs. Shippen sailed for the United States aboard a U.S. troop ship, along with 200 other "war brides." She arrived in Rawlins, by train, in the middle of a blinding snowstorm. After meeting her Wyoming in-laws for the first time, Mrs. Shippen journeyed cross-country by train to join her husband at Camp LeJeune in North Carolina, where they lived until the end of the war seven months later.

After the war, Mr. and Mrs. Shippen returned to Dubois and settled in a three-room log cabin on 160 acres, where they started their family. Over the next nine years, Mrs. Shippen gave birth to five sons who, her family said, were the center of her life.

While raising their family, Mr. and Mrs. Shippen worked, ranched, and lived in several locations across Fremont County, including the Dunoir Valley above Dubois, Lander, Burris, and rural Riverton. She made life-long friends where ever she lived.

Her family said that in addition to her family, a constant in Mrs. Shippen's life was her Catholic faith. She was a member of St. Margaret's Catholic Church, and also enjoyed attending mass at the mission churches on the Wind River Reservation, particularly St. Stephen's.

Her family said Mrs. Shippen loved children, animals, birthday celebrations, picnics in Sinks Canyon, and beautiful things from scenic landscapes, to pretty teacups, and fine works of art. They said she was especially kind-hearted toward animals and provided a home for many stray dogs and cats. She also loved music and as a young girl in New Zealand won several singing contests.

Mrs. Shippen is survived by her five sons, Paul and his wife Dusdee of San Leandro, Calif., Grant, Joe, and Robert of rural Riverton, and Gerald and his wife Donna of Cody; four grandchildren, Audra and Stephanie of California; Katie and Dorothy of Cody; one great grandchild, Carissa; former husband, Gordon Shippen of rural Riverton, and numerous nieces and nephews in New Zealand, Australia, and England.

Mrs. Shippen was preceded in death by her parents, four brothers, and a sister.