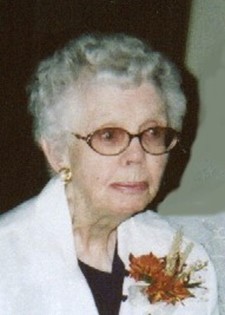 Guestbook 0
Graveside services will be at 2 p.m. Friday, Aug. 3, at Mountain View Cemetery in Riverton for Clara A. Yanoski of Riverton. The Rev. Father Andrew Duncan will officiate. Mrs. Yanoski died Tuesday afternoon, July 31, 2007, at Wind River Healthcare. She was 91 years old. Clara Agnes Fiscus was born in Johnsonburg, Penn., on Feb. 24, 1916, the daughter of Albert and Mary (Weidert) Fiscus. She attended school in Rasselas, Penn. She married George Leroy Yanoski on July 2, 1952, in Maryland. Mrs. Yanoski was a member of the Catholic faith. The family moved to the Gas Hills from Pennsylvania in 1973 for Mr. Yanoski to work for Federal American Partners. They moved in to Riverton in 1982. Her family said Mrs. Yanoski enjoyed fishing, hunting, gardening, bird watching, camping, visiting with friends, and enjoyed being around people. She was preceded in death by her husband on May 13, 2006; her parents; three brothers, Clarence, Harold, and Francis, and three sisters, Rita, Helen, and Mary. She is survived by numerous nieces and nephews, including Linda Beazley and husband Steve, and Robert Finn and wife Cindy, all of Riverton; a sister, Betty Boults of Wilcox, Penn.; sisters-in-law, Louise Fiscus of Johnsonburg, Penn., and Frances Fiscus of Wilcox, Penn.; brother-in-law, Archie Theis of New York. Memorials may be made to Paws for Life in care of the Davis Funeral Home of Riverton, 2203 West Main, Riverton, WY 82501. On-line obituaries are available and condolences for the family may be made at: thedavisfuneralhome.com Services are under the direction of the Davis Funeral Home of Riverton.