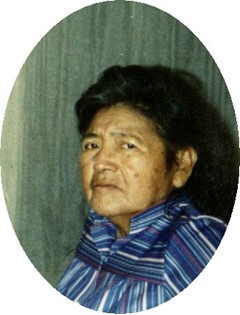 Guestbook 3
Lucy M. Blackburn of Arapahoe died Thursday, Aug. 2, 2007, at the Wyoming Medical Center in Casper. She was 68 years old.

She married Joseph Blackburn, Sr., in Thermopolis in September of 1959.

Mrs. Blackburn was a member of the Catholic faith and the Native American Church.

A homemaker, her family said she dedicated her life to raising her children, grandchildren, and great grandchildren. They remember her as a great story teller who enjoyed Native American church music and sundance songs. Her hobbies included reading and sewing.