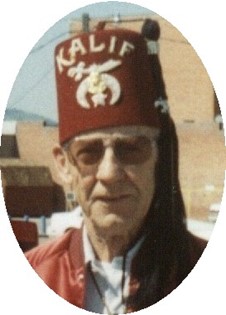 Tribute to Dick Fowler which ran as a personal column by Carolyn B. Tyler in the Friday, Oct. 19, issue of the Riverton (Wyo.) Daily Ranger --
CBT Column for FRIDAY, 19October07 -- CBT

Our biggest
losses are
friends
Dick was my friend.

Dick and Shirley Fowler were my best friends, primary helpers, and neighbors for 47 years on Sierra Drive in Riverton.

Dick was a friend to many -- make that thousands -- in Riverton, Fremont County, Wyoming, and into Kansas.

Tomorrow Dick will be buried at Mountain View Cemetery in Riverton alongside their 22-year-old son, Kim, whom Dick saw die in a tragic highway accident 29 years ago, when both were working for Gilpatrick Construction.

With Dick's death we've all lost a good man.

The young Fowler family came to Riverton nearly 50 years ago and told a story similar to many of us with "only" a half-century of being FreCo natives. They visited his sister here, loved everything about the place, and moved here within two weeks of that visit.

Dick died Saturday, Oct. 13, at the age of 76 with people throughout the community and state reflecting which was the last benefit for crippled and/or burned children Dick had enthusiastically sold them a ticket.

Dick Fowler was a salesman.

When husband-Bob and I moved to Riverton three years after the Fowlers we first knew Dick as a salesman for Ainsworth (later Rabeler) Motors. Dick's auto sales have forever linked him to the Riverton Ranger.

The Ranger was growing when Bob and I joined the staff in early 1961. One of the verbal pitches that most impressed me was that the Ranger had its own "steak truck." Exactly what for I couldn't imagine, but impressive nonetheless.

I soon learned it was in fact a stake-truck with the sides staked in when newsprint was transported from railside, and later warehouse, to the pressroom.

Dick sold that truck to Roy at the end of the 50s. It's still used in the operation nearly daily. Every word you've ever read in this newspaper started its journey as blank newsprint, hauled to the Ranger pressroom via the stake-truck.

Company lore had been that the stake-truck was new when purchased but Dick recently admitted to publisher Steve that no, it was "a bit" used before the sale.

What Dick sold, or did otherwise in his lifetime, was quality, and lasted.

His voluntary work for children in Shrine Hospitals for crippled children is legendary. For the annual Shrine Circus in Riverton, Dick always accepted the biggest stack of tickets to sell and every year his biggest frustration was not businesses to which to sell but "borrowing" unsold tickets from fellow Shriners to accommodate his waiting customers.

The same was true in the Kalif Shrine Center in Sheridan where Dick usually had sold the winning benefit raffle ticket somewhere in Northern Wyoming simply because he sold the majority of the tickets.

Dick retired from Gilpatricks in 1995 and while his philanthropic work through the Shrine was at the forefront, his interests were many.

And, oh my, he loved to visit.

One person reminisced to me this week about borrowing from Dick's collection of homemade miniature windmills to use for decorations. Within the year, Dick's collection of Masonic memorabilia from his grandfather went back to Kansas. There's a photo on my refrigerator of Dick with a second and third cousin of mine, sitting on the driveway this summer, carefully cleaning old auto parts.

Dick loved Boston Terriers and photos of my guys hung next to his hospital bed during his final two months in the Casper hospital, right next to photos of daughter Kathy and Dick and Shirley's four beloved grandchildren. Fowlers last Boston, Misty, had a long, good life because Dick and Shirley accepted her as she was -- with just three legs but a tremendous heart.

Dick collected many things, but most of all, he collected friends. I have kin from at least three states who stop across the street to say "Hello" to Dick before coming here when they visit.

Dick was a good man and a lot of people knew it. We mourn him.

His death diminishes us.