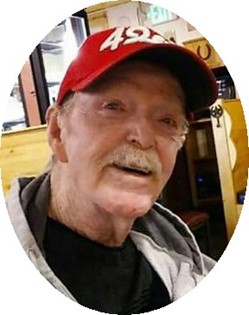 I am so sorry for the loss of Tom, he will be missed tremendously. In 1982 he became part of our family always made us smile or laugh with his jokes. Sending lots of love & prayers to his ex wife Darlene his children grandchildren & great grandchildren.

We lost contact with Tommy so long ago, but never forgot him. He will never be forgotten! Love you Tommy. Keep smiling, cuz!

Sorry for your loss prayers coming your way for the strength to get you threw this rough time.

Tommy, Davyn and family; Sorry for your loss of your dad and grandpa. Keeping you in our thoughts. Sincere Sympathy

My thoughts and prayers are with the family.

I am sooo very heartbroken by the loss of my cousin Tommy but at the same time I am relieved that he is reuniting with my uncle, auntie, and cousins in heaven. Tommy and I had many long talks about those that grew their wings and left us behind sometimes we'd cry and sometimes we laughed and there were times we were not really nice but no matter what we knew that we loved them all and really didn't care what our relationship was like with the judgmental ones we excepted every one because we knew that they were not going to be the final judge. I remember him telling me on many many occasions that if they want to stand out and make _____'s of them selves that they should stand PROUD and talk loud because it was their behavior that made him look better to the big guy up there. He would tell me he didn't care what others think about how he choose to live life best he would live HIS life his way, and the hypocritical ones can live theirs their way as long as they stayed away from him. He had told me on many occasions that if you're not comfortable with the people around me all I had to do is tell them to get the ____ away from me and if they didn't leave have a beer and buy them one too ,that they would definitely leave but they would also have a few choice words to speak about me. But not worry he'd say, if they're talking about you they are leaving some other undeserved people alone, so except it, and let them talk . He would be the most awesome cousin that helped me to except the crowds negative and/ or positive people don't define me it's my behavior that defines me, and it don't matter what anyone else's opinions were as long as I could except me for me right wrong whatever take the blame at least I was doing something and not hiding in a whole. I have been soon dog gone blessed to get to know my cousin Tommy and learn from the words he spoke to me. Do what's right not what he does or ideal have people pissed off all time unless I want them pissed off do whatever I want but do it with 100% attitude while doing it all in and never half ___ed. I will miss you my cousin, prayers for all of us left behind that feel his loss on earth . Muah much love to cousins Michelle, Tommy, and Charlotte, and Darlene