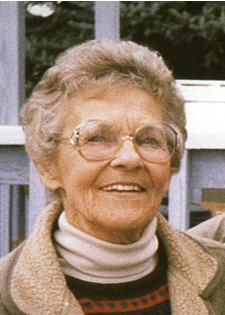 Guestbook 13
Betty G. Welch, 77, of Lander a real Wyoming girl died Tuesday morning, September 11, 2007 at her home. Celebration of her life will be held Sunday, Sept. 23, 2007, at 1:00 p.m. in the Hangar Room at Natrona County Airport in Casper Wyoming. According to her wishes cremation has taken place.

Betty Gene Caster was born October 12, 1929 in Guernsey, Wyoming to Eugene Ray and Ella Cecilia (McChesney) Caster. Betty grew up in various Wyoming railroad communities including Powder River, Madden, Glenrock and Guernsey. Her father worked for Chicago, Burlington and Quincy Railroad. She was graduated from Glenrock High School in 1947.

In 1962 she married Arthur Jack Welch in Casper. They moved to Lander in 1980 from Tensleep. Betty worked at the Flagstaff Motel and Café in Tensleep where she had a great time working with good friends. She had also worked in many drug stores as a clerk in various Wyoming towns such as, Pinedale, Carlin’s Drug in Glenrock, and Corner Drug in Lander where she became good friends with Myrtis Logan. She also worked for First National Bank of Casper and the Variety Store in Pinedale. At the County Assessor’s office in Pinedale she enjoyed years of work with her dear friend Miriam Carlson. She befriended her husband’s acquaintances in his profession as a big game biologist and loved the give and take banter with many of them over the years and across the state.

Her family said she was a Leader for Campfire Girls and Girl Scouts. She was also a past president for the Sublette County Wildlife Federation and a member of the National Bighorn Sheep Interpretive Center in Dubois. She enjoyed wildlife, the outdoors and being able to live in nature’s backyard. She also enjoyed gardening, taking care of her horse Eppie, and visiting with family and friends.

She was preceded in death by her parents, and brother-in-law, Bill Welch.