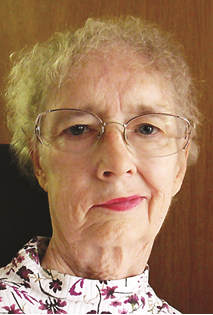 A celebration of life is at 10 a.m. Monday, July 16, at the United Methodist Church in Riverton, with the Rev. Mark Thurman officiating. Cremation has taken place. Inurnment will follow at Mountain View Cemetery.

Those attending the service are invited to wear an article of clothing or accessory in red to give the avid Nebraska Cornhusker fan a “Big Red sendoff.”

Carolyn Butler was born May 4, 1935, in Grand Island, Neb., to Vance Leroy Butler and Bessie (Heuring) Butler. Her father was a construction engineer for the Nebraska Highway Department, and the family moved many times between her birth and when the family finally settled in Neligh, Neb., in 1945.

She was able to remain in Neligh, Neb., for her entire high school career, graduating from Neligh High School with the class of 1953. She attended the University of Nebraska, completing a five-year program in three years while battling polio. She graduated as valedictorian of her class in 1956 with a degree in journalism.

Following college, she moved to Ainsworth, Neb., to work for the Ainsworth Star Journal, where she met her future husband, the newspaper’s owner/publisher, Robert H. “Bob” Tyler.

Mr. and Mrs. Tyler operated the weekly newspaper in Ainsworth, Neb., before moving to Riverton in 1961. At the time, they intended to work as temporary help for the late publisher Bob Peck, but they never left the employment of The Ranger.

Mrs. Tyler worked as a full-time member of The Ranger news staff from March 1961 until the time of her death, including 20 years as the newspaper’s editor from 1966 to 1986. She continued as a staff writer after that.

Mrs. Tyler was of the Methodist faith, being a member of the United Methodist Church of Riverton. She was a member of PEO-Chapter AP, and the Wyoming Press Association, through which she won dozens of awards for news writing, column writing and photography. Current publisher Steve Peck asserts that Mrs. Tyler won more Wyoming Press Association “Pacemaker” awards than any Wyoming journalist in history.

Her family said she loved her dogs, always Boston terriers, which she called the “Tyler Terribles,” took pleasure in watching birds, was interested in history, and loved being involved with and covering the Fremont County School District 25 Board of Education. She enjoyed doing photography for work and pleasure and was devoted to her family, which she nicknamed “The Becker Bunch” in her Ranger newspaper columns, which ran two to three times a week for 51 years.

She is survived by her sister, Linda B. Becker of Riverton; a nephew, Gregory Becker of Friday Harbor, Wash.; great-nieces and nephews Vance, Dylan, MaKenzie, Hailey and Tristan Becker of Driggs, Idaho; many cousins; close friend Candy McCue; and other close friends, including The Ranger staff.

Services are under the direction of Davis Funeral Home of Riverton