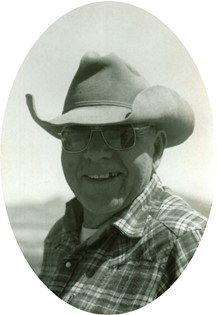 He attended schools in Red Canyon, Lander and the school of hard knocks.

Bill began hiring out at the age of 10 as a cowhand and sheepherder. He worked for a variety of cowmen including Roberts and Grieve’s for over forty years until he started fulfilling his own dream of he and his wife owning and running his own outfit.

He was interested in a variety of outdoor activities and firmly believed if it couldn’t be done horseback, it wasn’t worth doing. Though if it needed done, do it right the first time. Bill participated in rodeo in his earlier years and was always an avid spectator of the sport. In his later years, he enjoyed traveling to new places around the world. Bill lived his whole life on cow outfits throughout the beautiful state of Wyoming.

He worshipped and worked in the great wide-open spaces.

Bill was a longtime Farm Bureau member and Past Farm Bureau President. He was also a past Ag-man of the year of Fremont County.

Survivors include his wife of the family ranch in Pavillion; son, Calvin Hancock of Gas Hills, Wyoming; one granddaughter, Angela and her husband, Tyler McCann of Riverton; sisters, Edna Bringoff of Sand Draw, Wy and Patsy Hancock of Riverton; and numerous nieces, nephews and their children.