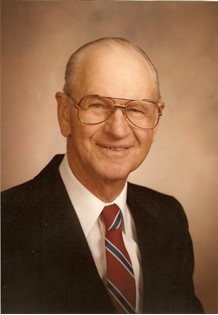 Carroll A. Riggs, of Riverton passed away on December 28, 2012 at the age of 101. Services will be held 10:00 a.m. Monday, February 11, 2013 at the United Methodist Church in Riverton with Pastor Mark Thurman officiating.

He was born August 14, 1911 in Snyder, Oklahoma to Cyrus and Caddie (Johnson) Riggs. Carroll was graduated from Laing school, a country school near Tipton, Oklahoma in 1930, where he played basketball and was the valedictorian of his class. The school was closed in 1958, but its graduates continued to meet on a bi-annual basis and Carroll attended several school reunions. Knowing education was important for his sons, Carroll’s father found the money during the depression years, to send two of his sons, Carroll and James, to Barnes Business College in Denver, Colorado where Carroll graduated in 1934. After college, Carroll returned to Oklahoma and bought a farm of his own. He later married Mayme Britt in 1941, a marriage that endured 65 years until Mayme’s passing in 2006. Mayme taught school in Snyder, Oklahoma when Carroll was called to the service of his country during World War II, serving in the Air Force, being discharged in 1944.

In 1948 Carroll and Mayme homesteaded on raw land near Shoshoni, Wyoming and on this homestead raised their children, Dan Britt Riggs and Carolyn Sue Riggs. Carroll developed at least 11 varieties of alfalfa, some in conjunction with the University of Wyoming, especially suited for the Wyoming climatic and soil conditions. He owned and operated an agricultural seed business in addition to several farms. He also developed a herd of registered Angus cattle winning several breeding awards over the years.

Carroll was active as a 4-H leader during the years when his children were participating in 4-H and served several terms on the Fremont County Fair Board. He enjoyed showing cattle and participating in fairs showing alfalfa. He was a strong supporter of the local agricultural community and enjoyed participating in community social activities. Carroll was a lifelong member of the United Methodist Church. He was a Mason and a Shriner. In addition to his parents he was preceded in death by his brothers, James and Howard, and by his wife Mayme and daughter, Carolyn Sue.

He is survived by his son Dan (Kathy) of Sheridan, Wyoming, his nephews' Tom, Jim and Lynne Riggs, Jim Britt and his niece Jody Humfreville.