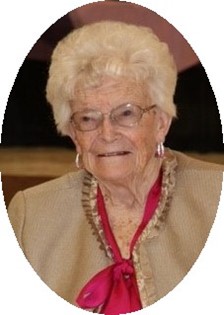 Guestbook 6
On July 29, 2017, Beth Chimenti took the hand of her husband and they walked through the gates of heaven to be together for eternity.

Beth Carson was born May 11, 1923 to David Carson and Jenny Rutledge in Casper Wyoming. She grew up in Casper with her brother, Hal and sisters, Doris and Dava. She graduated from Natrona County High School. After graduation the Carson family loaded up and was on their way to Alaska for a life in the new frontier, but due to WWII, civilian travel to Alaska was stopped. So Dubois became their new frontier, homesteading in the Dunoir Valley, what is now the Ramshorn guest ranch.

The isolation of ranch life for a young woman of Beth’s age, was not very appealing, so after a couple of years she chose to move back to Casper where she worked at the Casper Hospital as a nurse’s aide. Beth later took a job at the Casper Air Base as a secretary. It wasn’t long before the blonde secretary caught the eye of air force gunner, Pete Chimenti, from Brooklyn, New York. They began dating and joined the crowd “sneekin to the Beacon“ the local hot spot in Casper.

When Pete was transferred to the Air Base in Colorado Springs, Colorado Beth transferred to Denver and worked as a secretary at the Rocky Mountain Arsenal. After Pete proposed on the dance floor, they married October 8, 1945 in Raton, New Mexico and lived in Colorado Springs until Pete’s tour of duty with the Air Force ended. They then moved to Brooklyn, New York and lived in the apartment on the third floor of Pete’s parents’ home, in true Italian style. New York and Pete’s large family was a new adventure for Beth. She became a mother the following year with the birth of daughter Dava and again in 1949 when Patricia arrived. Pete surprised Beth in 1950 when he told her he believed she should be closer to her family so they would be moving their family to Dubois, Wyoming. Beth took over her folk’s motel business the Carson Cabins and helped her husband Pete at his gas station along with being a full time Mother. Son Michael arrived in 1953 and son Peter, Jr in 1957. Jerry Burmiester joined the family a couple of years later and became the older brother to all of Beth’s children.

As the years passed the Carson Cabins were moved and the motel was converted into apartments which Beth managed. Beth and Pete began driving the US mail route west of town as well. When retirement came, Pete built Beth her dream home on the golf course. They spent winter months in Mesa, Arizona where Beth enjoyed playing golf and going to baseball games of the Cubs and the Braves.

After 50 years of living in Dubois, Beth and Pete moved to Riverton In 2001. When Pete passed in 2005 they were just a few months away from celebrating their 60th wedding anniversary. In 2014 Beth was able to move back home to Dubois where she resided at the Warm Valley Lodge assisted living. She enjoyed seeing all her friends, living near the river and watching the wild life. Her last year was spent in Riverton.

Beth was a member of Our Lady of the Woods Catholic Church and Altar and Rosary. Over the years she provided housing and meals for the priest and nuns while they were in Dubois. She planted and cared for the church lawn, flowers, and was very proud of the large lilac bush on the front lawn that she planted. When the church had their bake sales Beth always baked her famous Maple Chiffon Cake, which was most always purchased by her husband Pete.

Beth cared for everyone and everything. She was a loving, devoted wife, mother and grandmother and loved unconditionally. She had amazing inner strength and Pete was the love of her life.