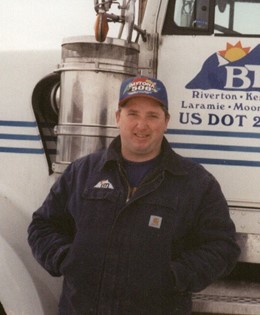 Memorial Services will be conducted at 2:00 p.m., Tuesday, July 17, 2007 at the Davis Funeral Home. The family invites friends and family to join them immediately following the service at the Sundowner for a dinner and time of fellowship.

Robert Dean White was born April 22, 1965 in Roseville, California to Michael Lee and Judith Carol (John) White. He moved with his family to Riverton in 1976. He was graduated from Riverton High School with the class of 1983. Following graduation he moved to Oregon for three years working for Pepsi. He has resided in Riverton since 1988. He drove truck for Black Bear Trucking and B.T.I. for the last five years.

He married Raelene Crane on February 27, 1998 in Riverton.

The family said he enjoyed the mountains. His hobbies included hunting, fishing, camping, riding four wheelers, snow machining, loved horses and spending time with family and friends. He was of the Christian Faith.

Survivors include his wife Raelene of Riverton; four sons, Robert M. White who is currently serving in Iraq with the U.S. Army his wife Chelsie and their two children Gracie and Robert Cole of Riverton, sons, Tom White of Oregon, Joe White and wife Liz of Oregon, their son Landon Parker; daughter, Shamra Meyer of Riverton; brother Brian Buie and wife Marcia of Calif.; sisters Glenda Coburn of Oregon and Michelle Buie-Miller and husband Bill of Utah; brother-in-law, Dusty Allen and wife Shiela of Riverton; sisters-in-law, Freda Moore of Riverton and Debbie Miller and husband Ron of Nevada; grandfather, John Loomis of California.

He was preceded in death by his parents, grandparents, Opal John, Bert and Margaret White.

Memorials may be made to the Wyoming Sportsmen for Fish and Wildlife care of Davis Funeral Home, 2203 W. Main Street, Riverton, WY 82501.